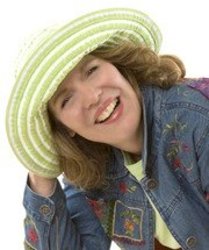 Linda Wheeler Roggli (1952-) is a "midwest farmers' daughter" who, at the tender age of nine, set a goal to write books. The result of that determination was an unfortunate series of bad childhood poetry ("Red, red, red: that's all I see.."), but the writing bug refused to release its grip on her soul.

She dabbled in essay, fiction, creative non-fiction and then, realizing that writers rarely make it to the New York Times best sellers' list, settled into a modestly lucrative job of writing advertising copy for radio, TV and newspaper. She did a stint as a newspaper reporter and was a TV journalist and film critic. Her first book "Durham: Doorway to Discovery" (1995) was commissioned by the Durham Chamber of Commerce and is still available on Amazon.com. She penned a short cartoon book "Angies' Choice" (2002) to illustrate the subtleties of passion and possibility before releasing "Confessions of an ADDiva: midlife in the non-linear lane" (2011), a book for and about women with Attention Deficit Hyperactivity Disorder.

When she's not dreaming up ideas for new books, projects and products, she is an ADHD coach for adults, based in Durham, NC and she is the dream catcher for GardenSpirit Guesthouse, her women's retreat house in central NC. She lives with Shelties, bluebirds and one wonderful husband in the same vicinity.
Results per page
Why Vervante?